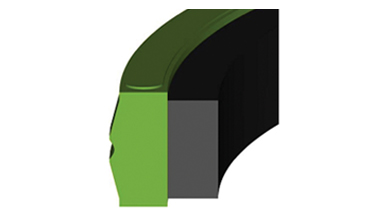 The urethane cap is a superb middle ground sealing choice between the O-Ring loaded seal and the capped T-seal. The urethane cap incorporates two sharp sealing lips, though it is specially designed to include a basin which provides for a cache of lubricating fluid. This construction allows for a greater sealability than a T-seal, while it lubricates the surface enough to reduce the risk of stick slip. The urethane cap, just like both the O-Ring loaded seal and T-seal, is engineered to fit within a standard O-Ring groove. A feature unique to other bi-directional seals is that the urethane cap includes grooves cut into the side of the seal face. The purpose of these grooves is to reduce blow-by failures should there be a sudden change in system hydraulic pressure.

The urethane cap is made from hard extrusion and wear-resistant polyurethane. It also features a rectangular energizer under the polyurethane cap. This energizer's square shape is more stable than what a round O-Ring provides, which reduces further the risk of seal damage during installation and use.